I arrived at VALR on Wednesday morning and was blown away by the crowd and the visitor center, which was updated in 2010. When I was about seven years old, my entire family traveled to Hawaii on vacation. Other than losing my mask to the waves, the only memory I have of the trip was my visit to Pearl Harbor. I was excited to return and to work alongside the NPS.

Upon heading to the rangers office, I was greeted by Scott Pawlowski, Curator and Park Dive Officer at VALR. Scott explained our plans for the next few days, detailed the diving program at the park, and gave me a quick tour of Ford Island. For the remainder of the afternoon, Scott gave me the chance to explore the visitor center. Since the expansion, the center allows visitors to visit the three memorials while also having access to the USS Bowfin Submarine Museum, the Battleship Missouri Memorial, and the Pacific Aviation Museum. On Dec 7th, the USS Utah was hit by two torpedoes which caused the vessel to flood and sink. After several failed attempts to raise the ship, the decision was made to leave the vessel in Pearl Harbor.

During my visit, the USS Arizona memorial was closed due to an engineering issue with the floating dock connected to the Memorial. However, I watched the short documentary and took a boat tour over to the ship. On Dec 7, 1941, about 15 minutes into the attack on Pearl Harbor, the USS Arizona was bombed by the Japanese. The bomb detonated in the powder magazine and caused the violent explosion of the ship which killed 1,177 servicemen. While 21 vessels lay sunk or damaged after the attack, almost half of the casualties on that day are attributed to the USS Arizona. With no visitors crowding its deck, the USS Arizona Memorial stood peacefully in the harbor My final two stops of the day were the Pacific Aviation Museum and the USS Bowfin Submarine Museum. The USS Bowfin was launched exactly a year after the attack on Pearl Harbor. This fleet attack submarine now resides by the Pearl Harbor Visitor Center and allows guests to explore her narrow hallways while learning about her nine war patrols between 1943 and 1945. After touring the tiny hallways, I took the opportunity to enjoy the sunny deck of the USS Bowfin Submarine

With no diving scheduled until Friday, I spent the next day on base working alongside Scott and Stan Melman, current archivist at VALR. My first project was to unlock several CDs which contained eyewitness accounts of the attack. Once unlocked, these CDs would be shared with the public and used to add to the historical record. Unfortunately, even after much research, I was unable to unlock the CDs. While I felt defeated, I still eliminated a few potentials and hopefully made success more likely for the next individual.

My second project of the day was to research waterproof and oleophobic fabrics or coatings that could be used for an upcoming project. The USS Arizona went down with about 500,000 gallons of oil and is still leaking about 9 quarts a day. To prevent oil from contaminating the surrounding ecosystem, later this year, Scott and Brett, Deputy Chief and A/V Specialist at the SRC, hope to create a collection tents that they can capture the leaking oil. Previous attempts have failed because the materials were compromised by the underwater environment and exposure to oil.

While spending the day in the office, I was also given the amazing opportunity to join several military personnel on a tour of the historical collected led by Scott. The historical collection at VALR includes over 60,000 objects ranging from photographs, drawings, memorabilia, diaries, newsletters, etc. that pertain to the War in the Pacific. The collection is used by the park for public programs; in addition, the park works to preserve and protect these resources while making the archives available to researchers. Each item in the collection tells its own unique story. After an office-filled day, I drove to the North Shore community of Haleiwa to enjoy the sunset and some ice cream

On Friday, I arrived at VALR with my scuba bag in tow. Currently, VALR has a small dive team which dives 30 to 120 times per year depending on the needs of the park. The purpose of today’s dives was to replace the buoys on the USS Arizona and USS Utah. Buoys placed at the bow and stern of each vessel are changed every 6-7 weeks. Even with only a few weeks in the water, the once clean, white buoys are quickly covered in encrusting organisms. To eliminate the hours wasted cleaning organisms and oil from the underside of the buoys, Scott devised a plan to wrap the buoys in saran wrap. After preparing four buoys, Scott, Stan, and I met up with Dan Brown, Concessions Management Specialist at VALR and our third diver.

When the memorial is open, usually the VALR dive team relies on an O2 kit and dive flag located at the front of the memorial. With the memorial closed, we took a few additional minutes to load our small boat at the visitor center. After notifying the NPS and US Navy by radio of our dive operations and boating plans, we slowly migrated to the USS Arizona and began setting up our gear. With a giant stride from the dock, Scott, Dan, and I were in the water with the new buoys in tow. As we swam towards the stern against the surface current, I watched as Scott quickly clipped on the new buoy before removing the previous one. After repeating the same procedure at the bow, Scott, Dan, and I ducked under the surface to complete an orientation dive. Diving the USS Arizona was a surreal experience. Today, this vessel remains the grave for over 900 servicemen who died on December 7, 1941. And while over 1.5 million people visit the memorial each year, I was among the few to have the privilege of diving such an important landmark of American history. As the silence of the underwater world set in, I thought of the many men who lost their lives that day and the efforts of the NPS and US Navy to protect the USS Arizona. When built the USS Arizona had twelve 14-inch guns, now only three of these guns remain as the other triple gun turrets were salvaged after the attack

As we explored the USS Arizona, Scott pointed out a well-preserved section of tile from the kitchen and a patch of wooden decking peaking out from under the sediment. With limited experience on wrecks, I was surprised with how well many of the artifacts on the USS Arizona were preserved. From kitchen bowls to pots to shoe soles, every piece of history made the vessel feel as though a lively crew had just inhabited its hallways. 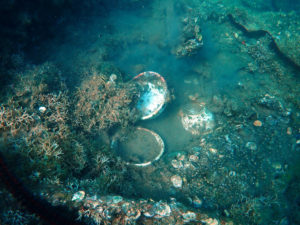 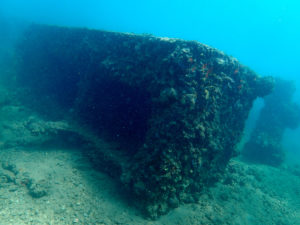 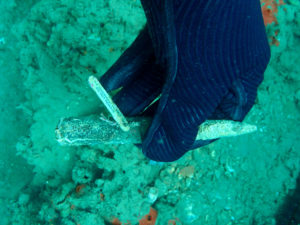 In contrast to the death the vessel represents, life in the form of marine creatures can be found at every surface. Beautiful feather duster worms extend their radioles into the water column while sea cucumbers twist themselves around the diverse sponge species that cover the now abandoned deck. The USS Arizona is around 30 ft at the deepest point. After surfacing, Scott commented on the spectacular visibility. Unbeknownst to me, 15-20 ft visibility on the USS Arizona was rare due to its location in the harbor. So not only was I fortunate to dive the site, but I was also lucky that my dive buddy was in view. While we, unfortunately, ran out of time to dive the USS Utah, I will never forget the afternoon that I spent diving the USS Arizona. 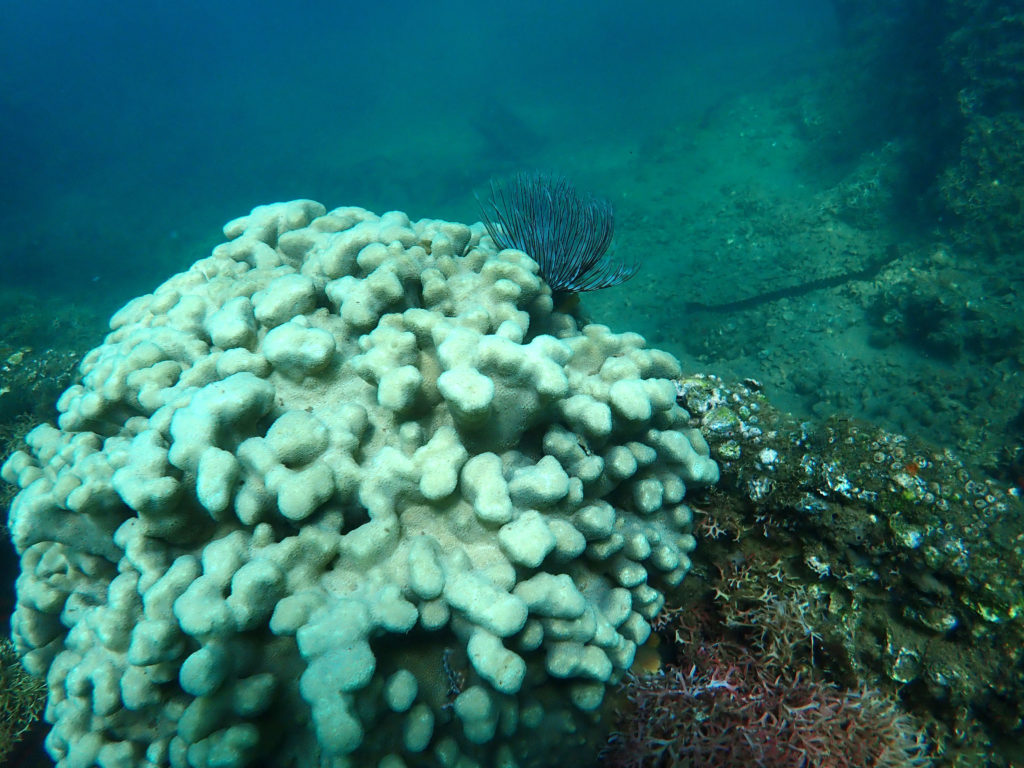 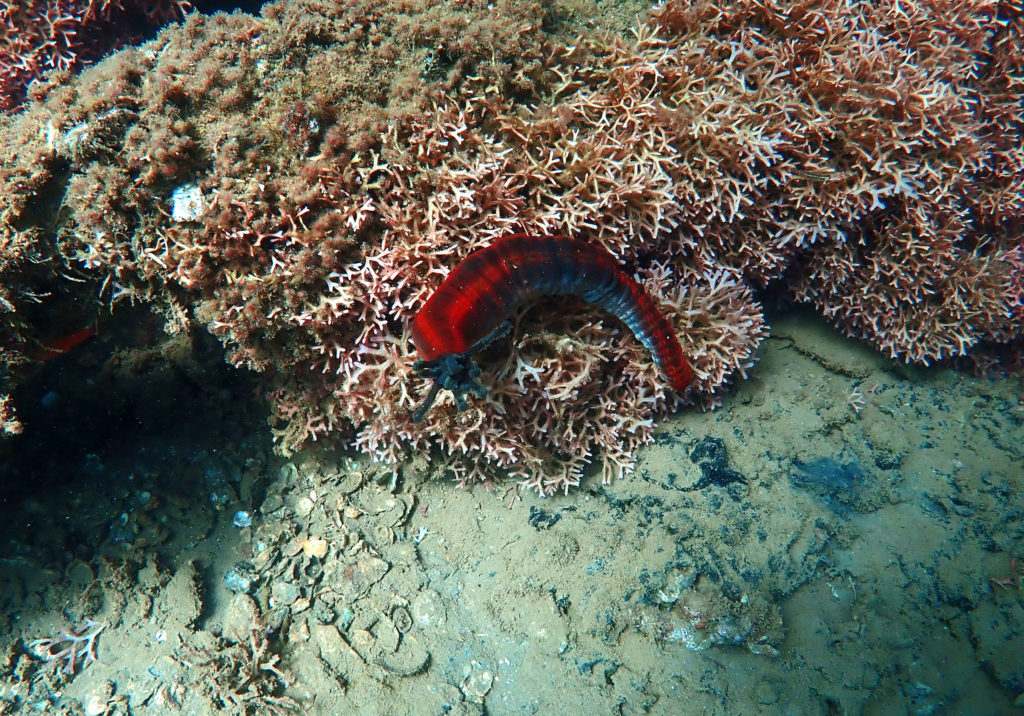 Before leaving Hawaii for the mainland to continue my adventures, I was fortunate enough to catch up with Erika Sawicki, the 2017 OWUSS AAUS intern. Last year, she spent time at Scripps Oceanographic Institute and worked alongside NOAA at Gray’s Reef National Marine Sanctuary. If you are interested in learning about her internship, click here. Thanks for all those who welcomed me to World War II Valor in the Pacific Monument. Even though my visit was short, I am so thankful that this internship gave me the opportunity to return to Pearl Harbor and observe all the amazing work the NPS does at VALR. Next stop, Dry Tortugas National Park with the South Florida/Caribbean Network Inventory and Monitoring Program!