This week was a hectic week, I received my drysuit from USIA, I had AAUS class, a day dive with Doug and Thew, and had to prepare for the five-day trip DownEast.

I was extremely excited to get my drysuit so thoughtfully given to me by USIA. As much as I love diving four times a day in a wetsuit, I will be more comfortable in my drysuit and able to focus even more on the science at hand. I am drysuit certified already but that was back in 2016. I metaphorically and literally was thrown into the deep end on our day trip out to Mohegan and Allen Island to test my drysuit for the first time. After a quick buoyancy check and 4 pounds of weight added to my setup, I was under the water and dry! During my four dives of the day I hadn’t had too much trouble adjusting to my new dive setup; however, my position in the water seemed a bit more vertical than horizontal. My feet most of the time seemed to be above my head. I’ll just brush that off and attribute it to me having to get down close to the substrate ripping out all the small little seaweeds which would lead to my awkward position.

The dives themselves with nothing especially out of the ordinary. The collecting procedures are the same, but we have become more efficient as a team both under and above the water. One positive about going to these different islands and places along the Gulf of Maine is I get to experience Maine from the water. People, when they travel to Maine, might take a day trip out to an island and back, they get to experience a small fraction of the coastline and islands that Maine has to offer. Me on the other hand, taking day trips and overnight trips up and down the coast of Maine, I get to experience a wide array of beautiful scenery, with the best vantage point — the water. After the day trip to the different islands. I had all of Tuesday to process and digitize all the samples collected.

Wednesday was the 4th of July, yet there is no rest for the wicked, and we could not afford to miss an AAUS class. Chris gave the dive instructors the day off and with one student sick it was a very small class. Our task for the day was to relocate sand screws using compass bearings we took last week at the same dive site. These sand screws were placed in the middle of eelgrass beds. Once we located the screws we were to run a transect out and quantify percent eelgrass cover. There was a small competition between the students as to who could come up with the best sampling procedure. Chris would be the judge, and the winning procedure was the one we would use in the field. Nick won the competition and we would be using his protocol to conduct percent cover of the eelgrass along with height, substrate type, and lobster/crab counts. This exercise was to help the student dip their toes into underwater diving research. Chris gave Nick and me free rein to plan the dive, locate the screws, and conduct the survey while just watching above. We were using similar material like when I dive with Doug and Thew, transects, quadrats, and writing slate. Thus, for me, I felt this was good practice to try and focus on my buoyancy skills while conducting the survey. In reality, the data we were collecting was just an exercise. I think there were more important aspects of scientific diving that Chris wanted us to see and try and work through. One of these skills was underwater communication. I found it key when diving with Doug and Thew to have good underwater communication. In our work together, we often place each other’s quadrats at the meter tape or ask if one person can move on to the next meter mark, or just asking if they are okay. Being aware of what your partner is doing under the water is a principal component of scientific diving. Another foundation principle is buoyancy especially with a sandy or silty substrate. In those conditions, one needs to pay attention to hanging gauges and equipment and especially their fin kicks. Even a hand touching the muck can disturb and add a plume of dirt into the water and into your quadrat. We worked through these skills and surveyed two sand screws in two eelgrass beds. Another successful day of class.

The following Thursday and Friday was purely prepping for our DownEast trip. As a Midwesterner and especially as someone from Minnesota the term “DownEast” was extremely confusing for me. To Mainers, DownEast means north, up the coast. I understand the east part because Maines coastline juts out to the east but I still don’t understand the down part. I call everything up, “up north” “I’ll come up to visit you,” even if someone was south we would still call it up, but I digress.

For this trip, we would be trailering the boat and taking a four-hour car ride north of Acadia National Park to the fishing town of Jonesport. This 5-day diving excursion posed some logistical problems like air fills. The nearest shop to fill our scuba tanks was an hour and a half away so instead of wasting our precious time driving there and back, the kind researchers at the Maine Department of Resources let us borrow extra scuba tanks. We brought 28 tanks in all, and our arms got a pretty good workout lifting them all. Another logistical piece was to bring enough collection/sampling equipment along with all our processing equipment. During these five days and four nights, we were living out of a motel, not an ideal place to sort and process samples. However, we brought our whole lab sorting equipment with multiple plastic bins and sorting trays of various sizes. Lastly, we needed to bring extras of most things. Besides our BCDs and exposure suits we had extra of almost everything, writing slates, quadrats, meter tapes, collection bags, multiple save a dive kits, coolers for kelp storage. It was quite the process of getting everything organized and then trying to fit it in the back of a truck. Doing some tree trimming with the RV Silver Sides.

The trip was from Saturday to Wednesday and we would have some help diving. Liz Maxwell a fellow scientific diver from U. Maine who previously dived with Thew would be joining us for one day. We also had Courtney there to help with general organization and seaweed processing. She was also the main DJ for the trip, as we remembered a portable Bluetooth speak which as Doug put it “Increased the coolness of his lab.”Our days were long, but fruitful, with fun mixed in too. Morning wakeup calls would be at 5:45 to promptly go to breakfast by 6 a.m. We would be out on the water all day with long boat rides to far east sites. We won’t be back to the samples at the motel unit 5pm most nights. Our work did not end there; we would usually go right from diving to sorting for three hours or so before cleaning up and going to dinner at Helen’s. Something that was on everyone’s mind at the end of a long workday Along the Bold Coast, where we would be sampling the water was cold. The surface water was a balmy 50 degrees and temperatures at depth were as low as 47 degrees. My drysuit came in handy keeping my dry and happy all day every day. Like I said early, in my drysuit, I am happy and comfortable at the end of a four-dive day. The first day of diving because of Liz I only had to dive twice instead of four times. This was a pleasant break from under the water and gave me a glimpse of what Doug and Thew do above the water. While diving the surface people are transferring the seaweeds from collection bags to storage bags, organizing the boat, and just enjoy the sunshine. With my time not diving on the first two dives, I got to take some great but maybe less the flattering images. 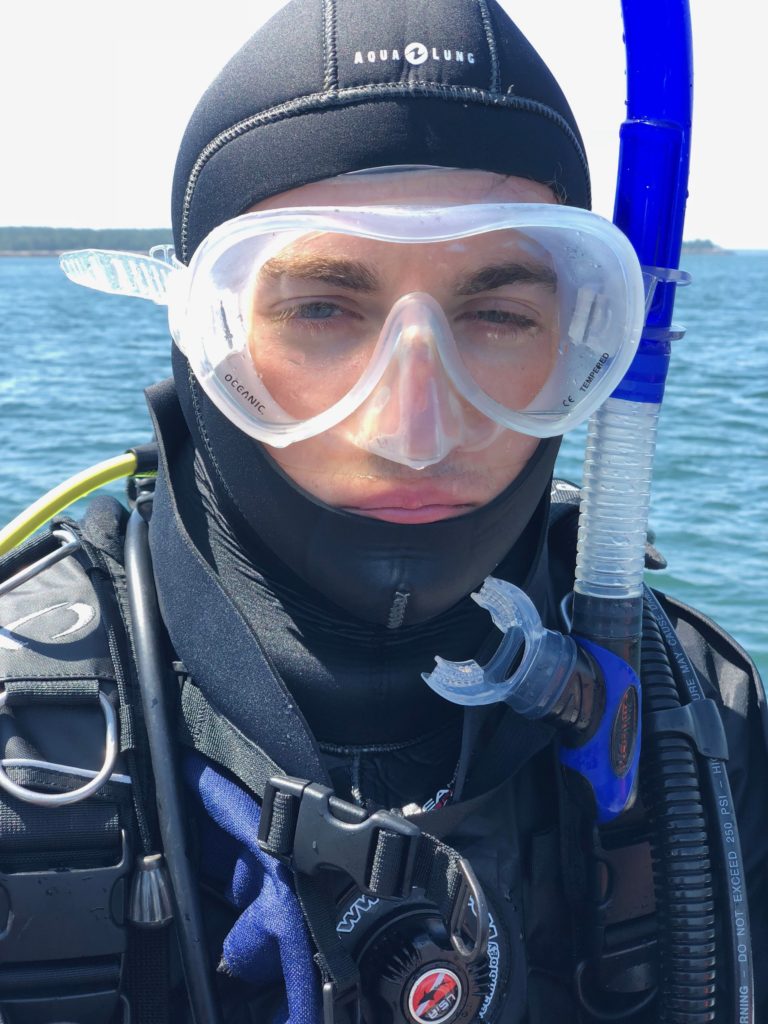 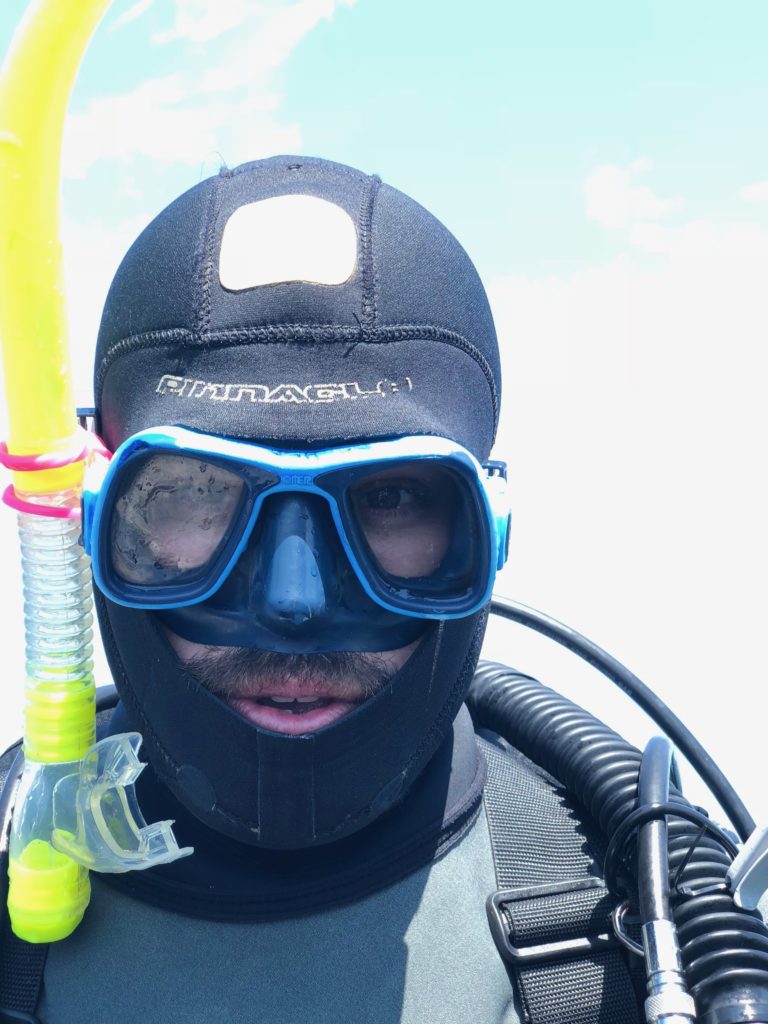 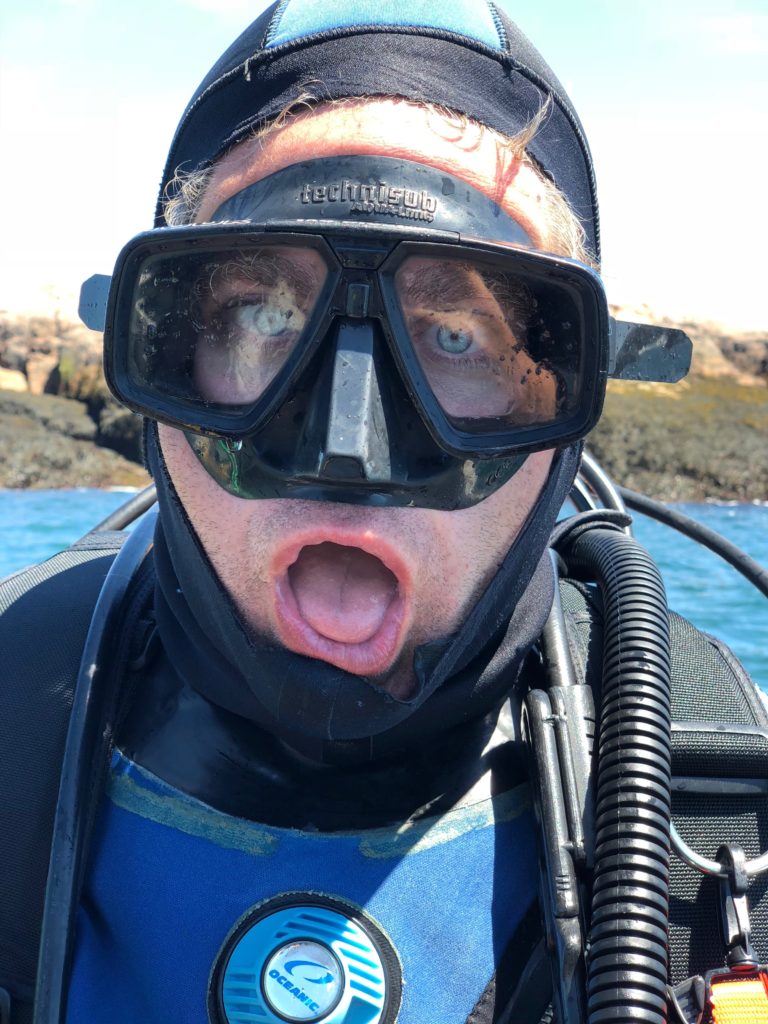 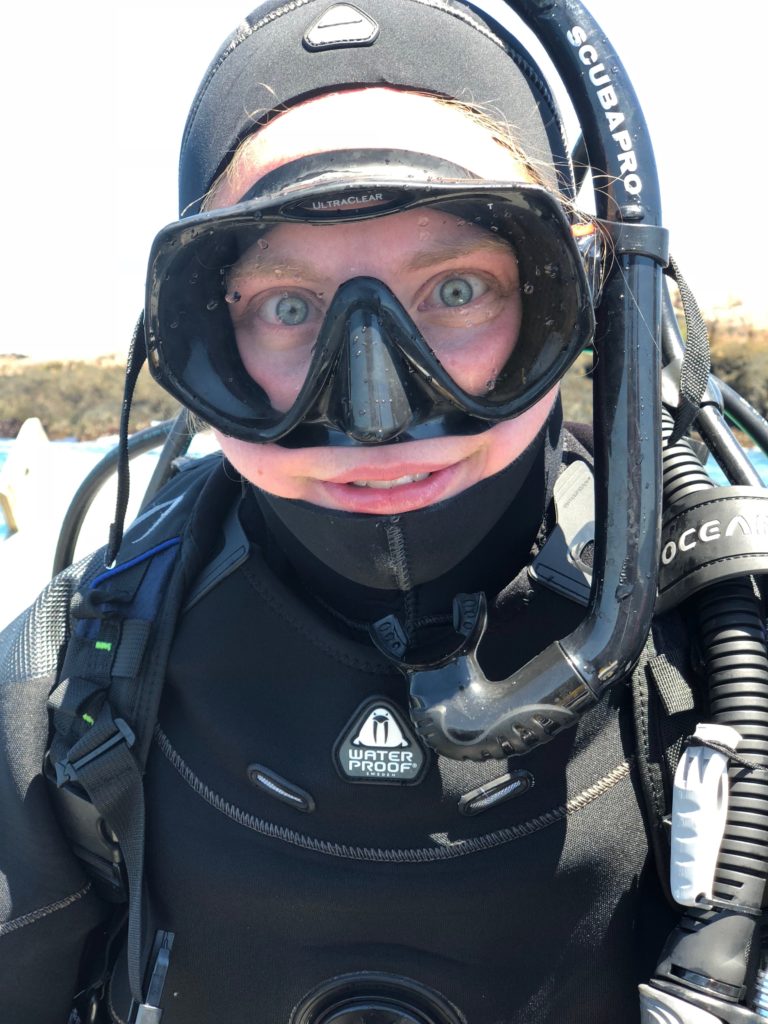 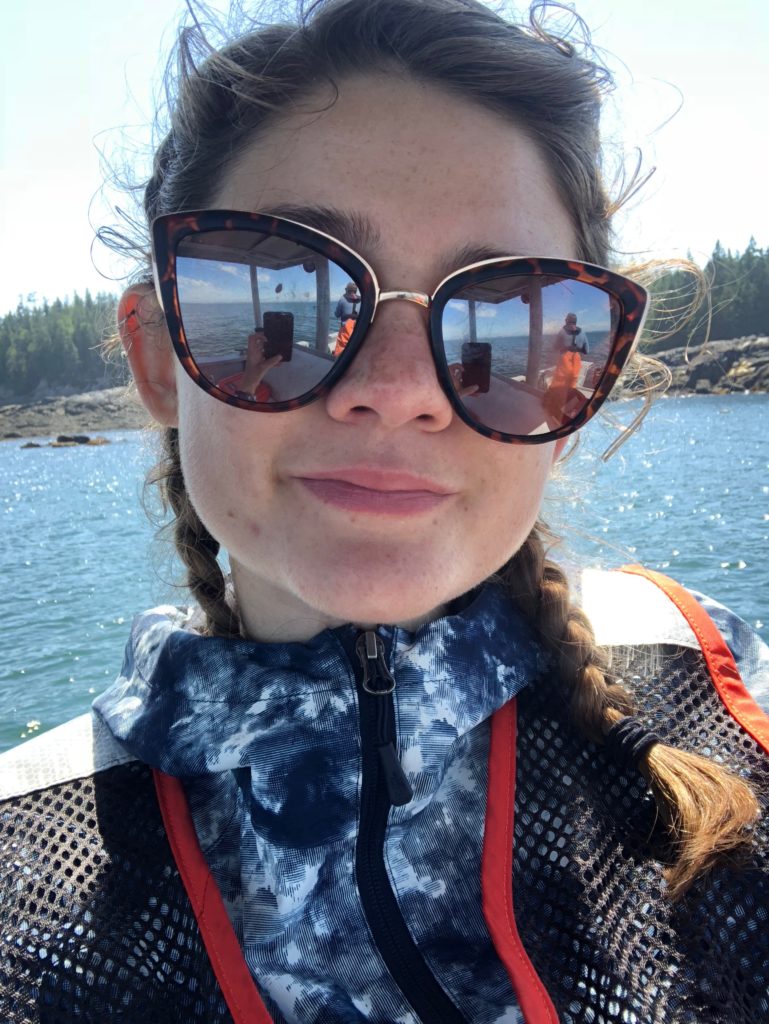 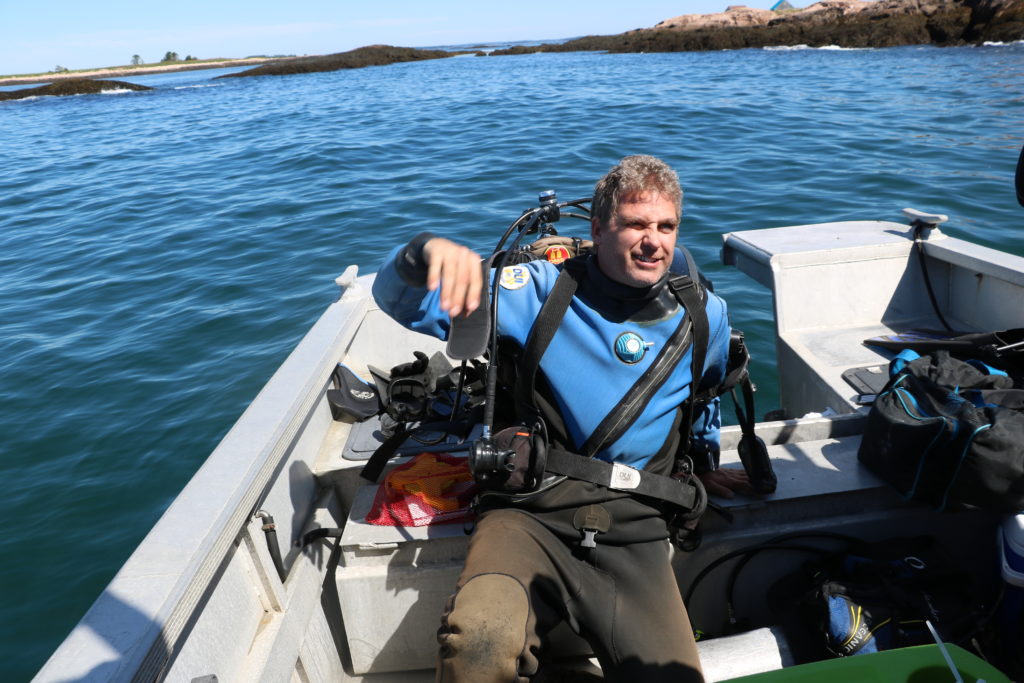 Diving isn’t always easy. Getting into a BCD can be difficult as Thew demostrates.

These dives would follow the same procedures as the previous ones with our efficiency going through the roof. I’ve started while collecting the understory to try and identify each species before putting it in my collection bag. Ironically, identifying the small red seaweeds can be easier in the water than online. On the surface the frilling reds clump together making their distinguishable markings hidden; however, in the water, the frills of the seaweed are flowing making them somewhat easier to identify. 12 different seaweeds separated to be placed in an oven to dry them out for a comparison between wet and dry weights.

During the days of diving, we had a diverse array of sites, some silted out with little kelp and seaweed, and others with an abundance of large kelps. Kelp can be as small as this juvenile. Kelp stipes can be massive, or…

One site, in particular, exemplified a mass aggregation of primary productivity. It was our last dive DownEast, and we were diving at the site named Ram Island. In past surveys, the kelp has not disappointed and that was sure the case this time. Doug and I after the dive both proclaimed that this was hands down the best of the summer so far. Our opinions were backed up by my collection bags which were overflowing with kelp. There was so much kelp per square meter that some of our collection bags were too small to put all the kelp and understory in them. The dominated kelp was L. digitata. These kelps can get big, four feet or so, but the length of the kelp is not the impressive part of this species. Instead, the stipes of these kelp are most impressive. The stipes are significantly larger than one’s thumb and have multiple three to four-foot-thick blades originating from the bottom. One plant can weigh a couple kilograms if it’s big enough. In one square meter, there was over 13 kilograms’ worth of kelp, not including the understory which covered the floor! It is amazing to see such primary productivity in such high abundance, a true sight to behold. It was a great farewell to DownEast and from there it was back to Bigelow to continue processing the kelp. Doug writing on his slate.

Next week will be less diving and more data entry from our recent trip. AAUS class as usual and our class has scheduled a boat charter to dive on Monhegan Island which will be a great experience in a less formal scientific training setting. Rumor has it we will be doing some deep diving. Thank you, USIA for the gift of dryness, to the DMR for lending us the tanks, and as always OWUSS and AAUS for this underwater adventure.