With Denver in my rearview mirror, I flew into LAX ready to visit my first park. Headquarter in Ventura, California, Channel Islands National Park (CHIS) is composed of five spectacular islands and their surrounding marine environment. Created in 1980, the main goal of this National Park was to protect the diverse terrestrial and marine ecosystem of the Channel Islands. After a shuttle ride along Highway 101, I was met by Joshua Sprague, a marine ecologist for CHIS. He graciously showed me to my accommodations for the evening, the Sea Ranger II. The 58-foot research vessel would be my home for the next six nights. On this fine Sunday evening, the boat remained docked behind the Visitors Center. With the crew not arriving until early Monday morning, I spent the evening exploring the harbor, walking the beach, and learning how to not bang my head into every overhang on the Sea Ranger II. In the morning, the members of the long-term kelp forest monitoring project began trickling in. After organizing our gear and stocking the kitchen with a healthy supply of snacks, we bid farewell to our loud barking neighbors (i.e. the California sea lions) and headed towards our first site of the week along Santa Cruz Island’s coast.

The Kelp Forest Monitoring (KFM) Program at CHIS is an extremely impressive, complex operation. Starting in 1982, the program initially monitored 13 dive sites around the islands but as of 2005 has expanded to 33 sites. The marine ecosystem surrounding CHIS supports over 2000 species. Each year from May to October, these 33 sites are surveyed to collect the size and abundance information of 120+ species of marine fauna (e.g. algae, invertebrates, and fish). The data allows researchers to examine the kelp forest’s health and monitor ongoing changes to the environment. KFM was not created with the intent of answering questions. The data from the program is public record, and the identified baselines are used to help establish marine protection protocol. Currently, 20% of CHIS waters are considered state marine protected areas. In addition to the KFM program, Channel Islands National Park supports a wide variety of other programs that focus on the overall health of the park resources (e.g. intertidal, pinniped, bird, and invasive plant monitoring).

With a rougher Pacific Ocean passage behind us, we arrive at our site for the day, Pedro Reef– Santa Cruz Island. Not located within an MPA, the dive site is barren and uninhabitable. The lack of kelp at this site can be attributed to overfishing. When predators of sea urchins are overfished, their population size increases. As herbivores, urchins consume the kelp that provides food and habitat to other marine organisms. Having just completed my blue card certification in Colorado, I still had to finish the open water portion. For this, David Kushner, the Regional Dive Officer and head of the KFM program, ran me through several underwater skills. While the low visibility had me a little disoriented at first, I am proud of how I handled my first open water dive in a drysuit and my first dive in the Pacific Ocean. Getting out of the water was another feat entirely. With the waves rolling and about 20 lbs. resting on my hips, let’s just say I rolled onto the boat platform rather than gracefully glided. Definitely not a picture worthy exit. As part of my exam, I was also supposed to perform a surface swim. However, due to a recent great white shark sighting, it was decided that me swimming across the surface in a brown drysuit might appear too seal-like.

After finishing my dive and realizing that my drysuit didn’t actually manage to keep me dry, I spent the remainder of the day assisting topside as the KFM crew finished collecting data. From band transects to roving diver fish counts, a multitude of different surveys are performed at each site to observe the fish, invertebrate, and algal communities. Water temperature is recorded, and a video transect of each site is captured for historical reasons. The imagery allows the KFM members to visually look back on the 33 sites visited each year during their survey season. One of the most impressive survey protocols used by the KFM program is Random Point Contacts (RPC). In a full-face mask attached to surface supplied air, a diver travels along the transect and at random points calls out the organism covering the substratum. The full-face mask allows the diver to communicate with the surface support person and the need for a slate is eliminated. Such a technique, allows a massive subset of data to be collected in a shorter amount of time. In the evening, Captain Keith Duran anchored the Sea Ranger II at Smuggler’s Cove. We ate a lovely dinner, and then I watched as the crew checked and consolidated the data collected at Pedro Reef. Each evening of the cruise, the team spent 1-2 hours discussing the site in detail. They recorded any anomalies and worked together to create a species list for the site (ranking species based on their prevalence).

On Tuesday morning, with the anchor pulled at 7:30 am, Captain Keith drove us to our second dive site of the week, Landing Cove – Anacapa Island. Tuesday’s dive site was located in a marine reserve established in 1978, the oldest in California. Diving this site provided a unique contrast to the urchin-dominated Pedro Reef where we spent the previous day. Landing Cove also gave me my first opportunity to observe the diverse kelp forest habitat in its full glory. With a leaking drysuit, I was fortunate enough to borrow Cullen’s extra 7mm. The suit definitely kept me warm and the camouflage pattern was a great fashion statement. On my first dive, I accompanied Merrill McCauley, a park ranger, as he completed a macro survey. Macro surveys involve counting stipes on 100 giant kelp (Macrocystis pyrifera) along the transect line. During the second dive, I followed Luis Hernandez and Merrill through the towering kelp as they performed 5-m transects. Since I had no experience identifying the fauna at CHIS, by the second day, I was still too green to contribute to official data collection. 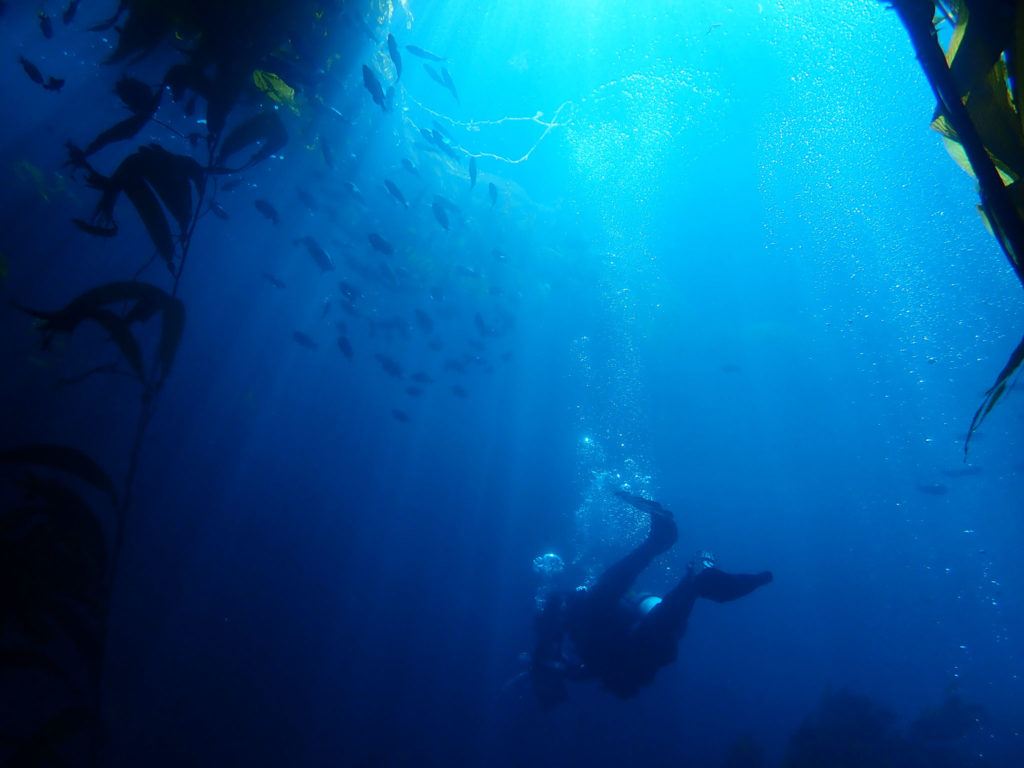 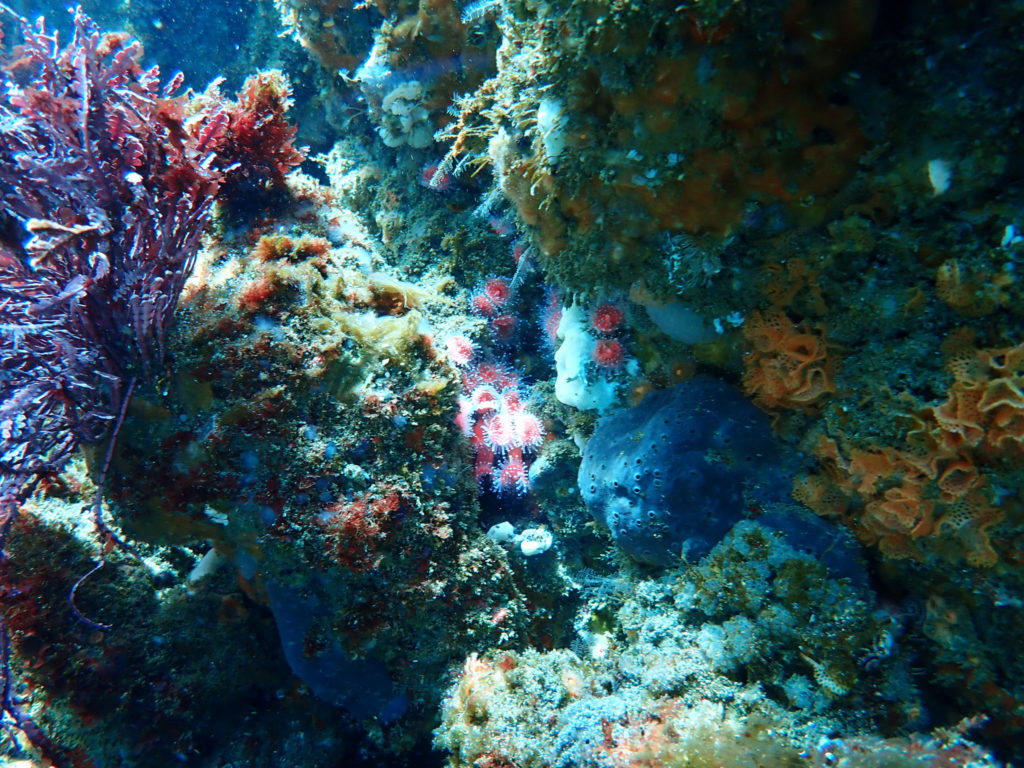 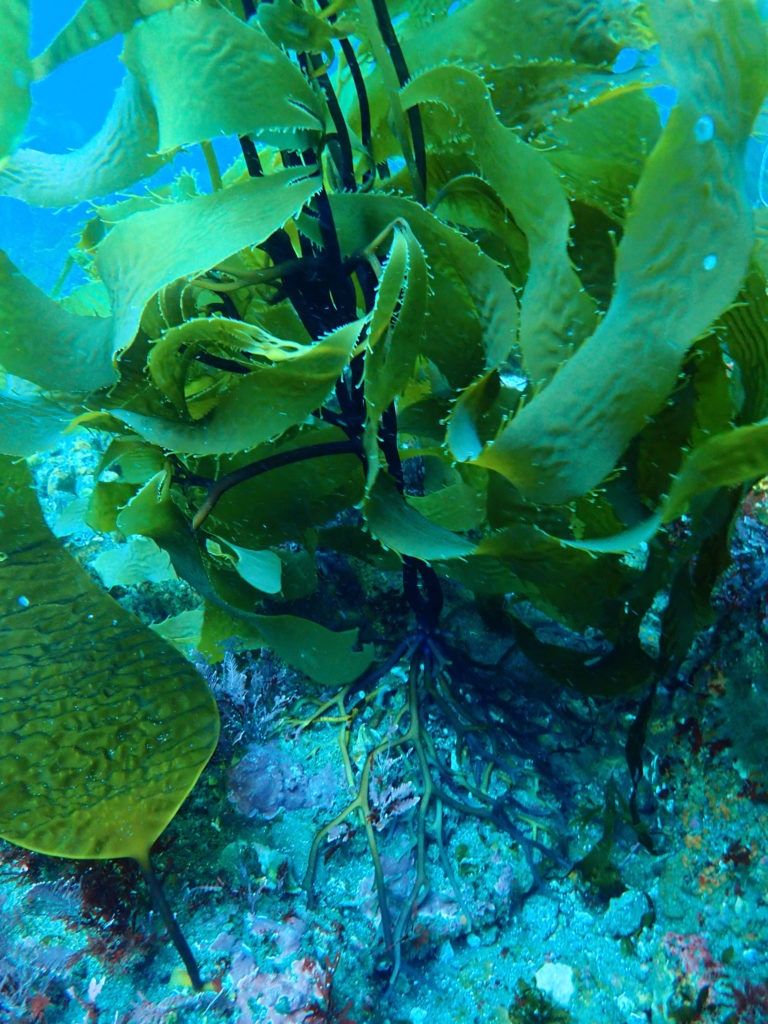 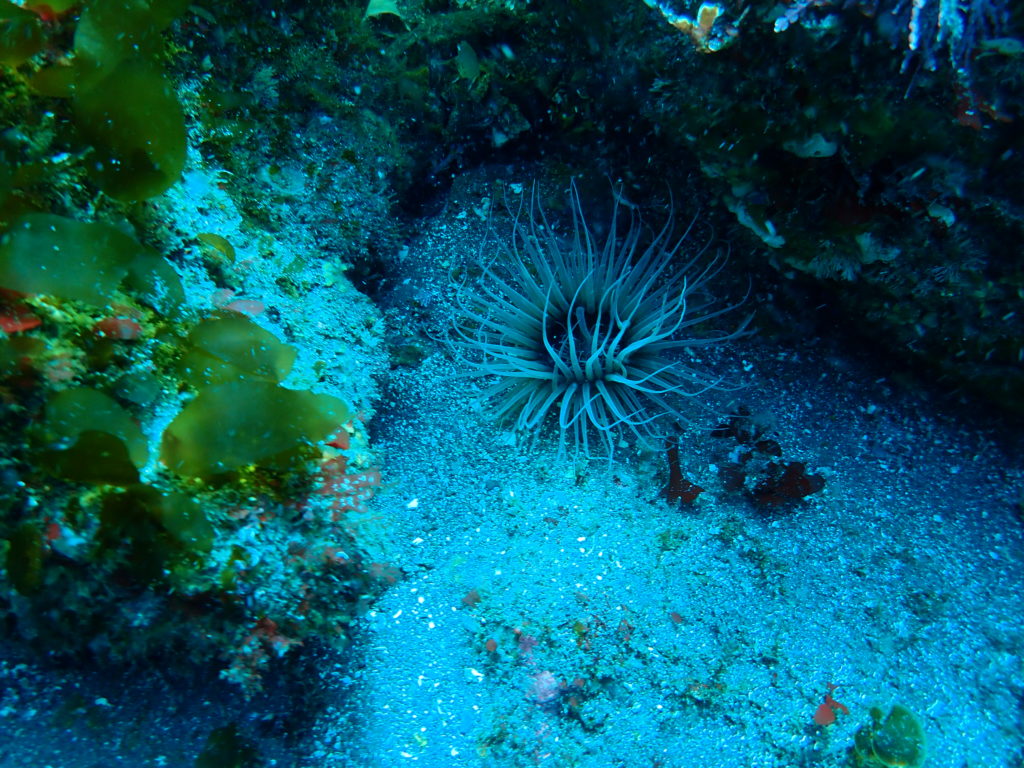 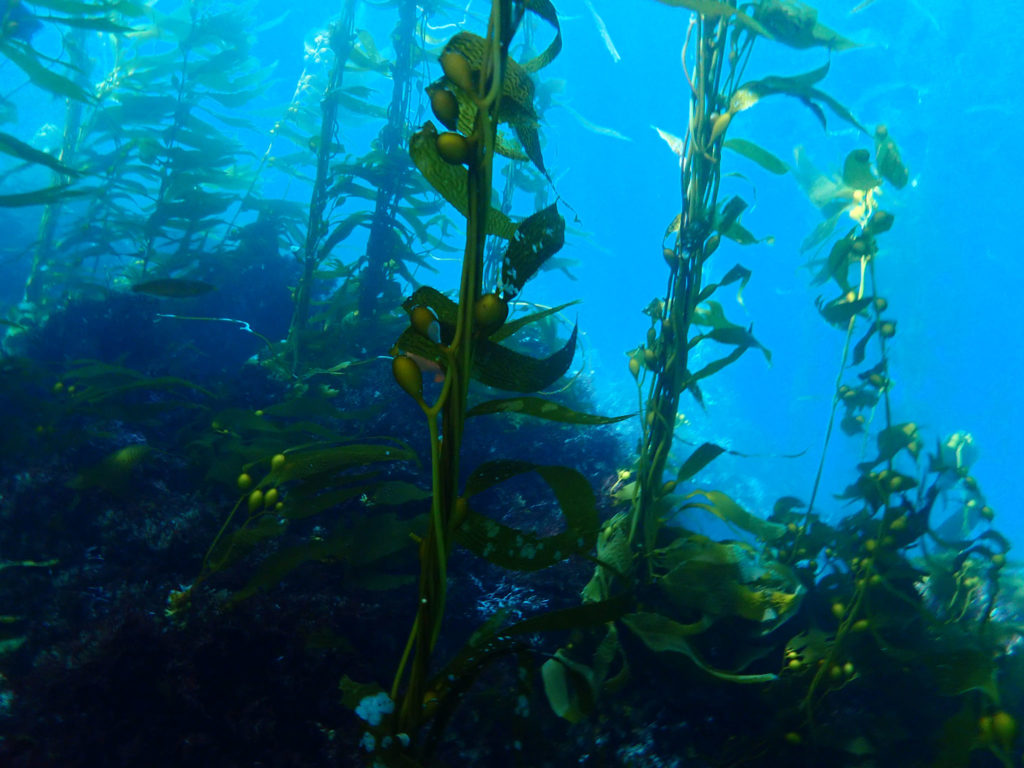 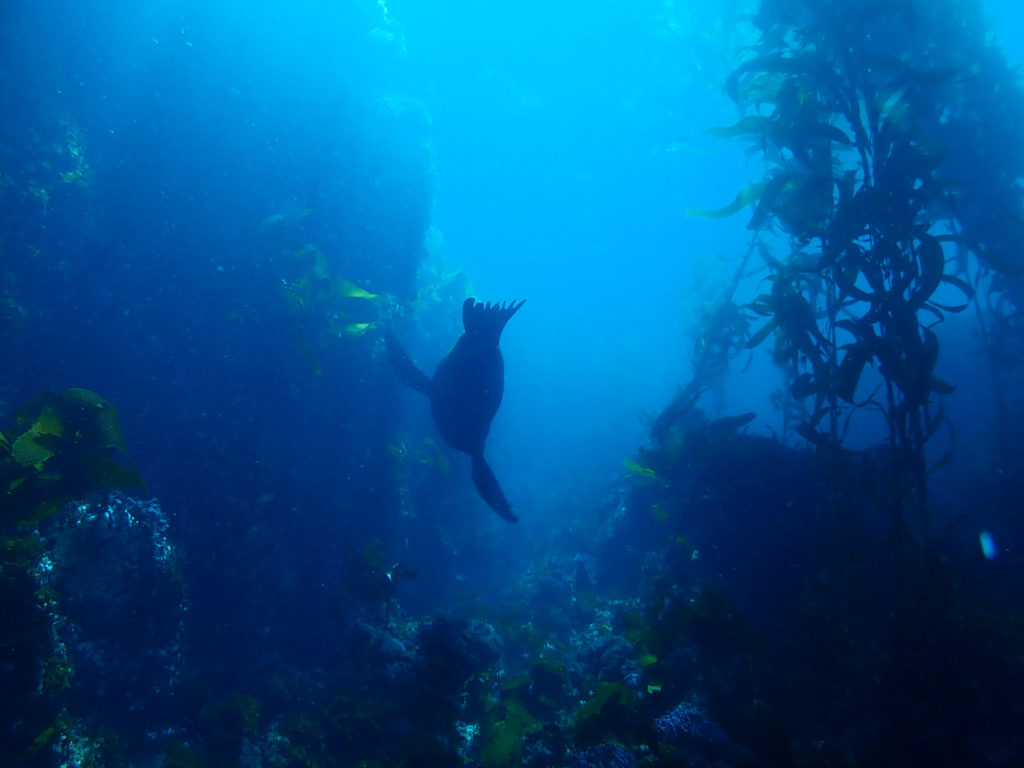 Following a productive day of diving, the seasonal interns and I explored Anacapa Island. This small desolate island becomes a dense, western gull breeding ground from May to July. Anacapa supports the largest protected breeding colony of western gulls in the world with over 10,000 individuals. While we enjoyed the amazing views and the baby seagulls, Erin Jaco, unfortunately, learned the hard way that these birds sometimes use their poop as a foul weapon. From the roof to the island’s sign, no place is untouched by the western gull population on Anacapa Island On Wednesday morning we anchored at Cavern Point – Santa Cruz Island. Located in an MPA established in 2003, this site gave me the opportunity to contribute to the data set for the first time. Luckily, the previous evening, Cullen was kind enough to help me patch my drysuit. And thankfully, his repair was successful. On my first dive, Merrill and I performed macro counts and measured gorgonians. For the second dive, Captain Keith and I were given the opportunity to explore. I became enticed by the spectacular invertebrate community at the site. From the sea cucumbers to tunicates, these are creatures that you don’t notice when you are focused on counting Macrocystis stipes or searching for the next gorgonian to measure. Keith and I also saw several massive California sheephead (Semicossyphus pulcher). Overfished in some regions of the park, the KFM program has found that targeted marine fish, such as sheephead, have larger average lengths within MPAs. And bigger fish means there are more eggs. Graced with a few more hours of daylight, the group explored Santa Cruz Island. The largest of the Channel Islands is split between the National Park (24%) and The Nature Conservancy (76%). Docking at Scorpion Anchorage, we hiked 3.5 miles (roundtrip) to a vantage point of our day’s dive site. Compared to Anacapa, this island was covered in green vegetation and rolling hills. While on the island, island foxes, a unique subspecies, ran along the campsite trails. Living on six of the eight islands, these foxes are 1/3 smaller than their mainland ancestor. Located in a marine conservation area established in 2003, Thursday’s dive site: Keyhole – Anacapa Island, is closed to all fishing except recreational/commercial lobster and pelagic fish. Unique to this data collection day, Merrill and I spend one of our three dives measuring the bat stars (Patiria miniata) that riddled the site along the transect line. Since Friday marked the end of the KFM trip, the team did not have sufficient time to visit another survey site. Instead, we used the morning to complete a 90-foot dive at Yellowbanks – Santa Cruz. Open to all fishing, this kelp-less landscape is dominated by brittle stars and enormous sea urchins. Previously a home to abalone, the only evidence of this species was a large shell trapped in a discarded lobster trap entangled on the ocean floor. Upon completing the dive, we were accompanied by common dolphins as we traveled back to Ventura. By the end of the KFM trip, I had learned a lot. My buoyancy with a drysuit had drastically improved, and my entry/exit from the water was nowhere near as clumsy as my first day. When I arrived, I have to admit I was intimidated by the amazing, dedicated divers of the KFM program. To collect data vital to the park’s records, they performed long dives several times a day often in limited visibility and current. I learned a lot from them and enjoyed getting the opportunity to dive all week in this lovely park. I even had a fantastic drysuit hand tan to show for my first national park of the summer!

Like my first night in Ventura, my final night was spent on the docked Sea Ranger II surrounded by a chorus of barking sea lions. After almost missing my shuttle back to LAX, I arrived hours before my flight and got the chance to catch up with a close, college friend, Chloe Von Helmolt. In the evening, I headed back to the airport in search of warmer waters. Biscayne National Park about an hour south of Miami, Florida would be my next destination. While I enjoyed kelp forest diving, tropical waters were calling my name as I boarded my red-eye in search of the sunshine state.

Thanks again to the amazing Kelp Forest Monitoring team!